Samuel Kilderbee was an Ipswich lawyer, now remembered chiefly for being a life-long friend of Thomas Gainsborough. He had a successful career as an attorney, in particular representing Nathaniel Acton in many legal transactions. In 1755, during the period of political turmoil in Ipswich, he was installed as Town Clerk, a position he retained until 1767. It is unclear if the Gainsboroughs had known the Kilderbees before Gainsborough’s move to Ipswich after his London training, but it is certainly possible. The Kilderbee family had been living for several generations in Framlingham, while Gainsborough was from Sudbury, on the other side of Ipswich.  Once they did meet, they became firm friends until the end, although, as with much of Gainsborough’s life, direct evidence is scanty. From Gainsborough’s letters, we know his family visited the Kilderbees from London in the 1770’s, and Gainsborough and Kilderbee made a tour of the Lake District in 1783. Gainsborough made Kilderbee `overseer’ of the execution of his will and Kilderbee visited Gainsborough on his death-bed, where he reported that Gainsborough, “regretted the dissolute life he had led, but added, `They must take me altogether, liberal, thoughtless, and dissipated.'” William Jackson said that Gainsborough’s letters to Kilderbee were `brilliant but eccentric, and too licentious to be published’, and indeed they never were.

Early on, Gainsborough painted portraits of Kilderbee (at least twice), his wife, and one of her brothers. 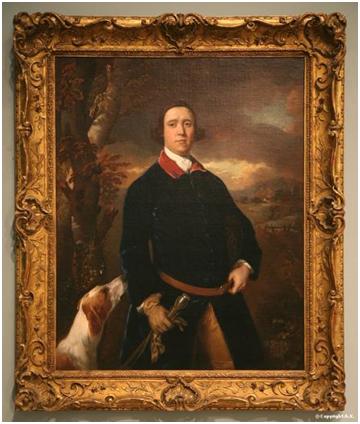 Later, he painted a portrait of the Kilderbee’s son, the Rev. Samuel Kilderbee.

The Kilderbee family had some interesting naming conventions. Samuel Kilderbee’s grandfather, Francis, had married one Elizabeth, the only daughter of a Suffolk apothecary called Samuel Dover. They named their sons Dover and Samuel. In due course, Elizabeth inherited from her father, and this enabled Francis, a successful draper in Framlingham, to buy some land for his elder son to inherit in his turn. Dover went on to Cambridge and success, but died without issue, and the prosperity passed to his younger brother Samuel, who had taken on the family draper business. Samuel married Alethea Sparrow (we will hear more about the Sparrows later), and they in turn had two sons, Samuel the lawyer, and his brother John, who continued the family business into another generation. Samuel’s wife Mary was the daughter of a landowner Daniel Wayth. They had one son, the Rev. Samuel Kilderbee above, who was renowned for his wit and amusing conversation, and for living beyond his, by now quite substantial, means. Fortunately, the Rev. Samuel married a widow who could contribute to the family coffers, Caroline Waddington, daughter of Samuel Horsey. Their only son, Spencer Horsey Kilderbee, married Lady Louisa Maria Judith Rous, daughter of an Earl, and went on to be an MP under the rather splendid name of Spencer Horsey de Horsey.

Dover Kilderbee and one of the Samuels were subscribers to the first edition of Kirby’s Method of Perspective, and (a) Samuel and John subscribed to the second edition of the Suffolk Traveller.