Advowson and presentation was the right to nominate a person to a vacancy in a parish in England, subject to the approval of the bishop. Appointment as a vicar, deacon, or curate, could be for life and could be a valuable position. The resources available to such livings varied enormously, but many clergy could live quite comfortably off their parish lands. The right of advowson was tradable and was often bought by someone with a son who needed a living.

In the Ipswich Journal of June 15 1850 appeared the following announcement.

The incumbent was William Kirby, and he died on July 4 1850.

I do not know how much the advowson went for, but the next rector was John Schreiber, son of William F. Schreiber of Ipswich, on presentation by his father in September 1850.

William Kirby (1759—1850) was a long-time rector of Barham in Suffolk and a famous entomologist. He was the son of Lucy Meadows of Witnesham and William Kirby, Joshua Kirby’s brother.

William went to school in Ipswich and then up to Cambridge before taking orders. He soon landed a ‘snug berth’ as curate, and later rector of Barham, a position he held until his death. “I walked over one evening from my father’s house carrying my own bundle and here I have been ever since and a nice snug berth it was for a young fellow to step into.”

Kirby’s interest in the natural world was sparked by his mother, and having exhausted local plants, he turned to insects. He came to entomology at a fortunate time. Few humans had ever paid much attention to bugs and the field was wide open. William Kirby was a patient, detailed observer, carefully seeking out the defining characteristics of his specimens. His first major work, Monographia Apum Angliae, was published in 1802, detailed and related some 200 species of English bees, about 90% of which he had caught in and around his own parish. This book was followed by the monumental multi-volume Introduction to Entomology, written with his long-time collaborator, William Spence. Kirby and Spence became a classic work, on the shelves of all with an interest in insects.

As his fame grew, fellow collectors sent him specimens from all over the world, but most of his own collecting was done quite locally. He would go out and, quite literally, “beat the bushes” with his walking-stick, catching falling insects on a sheet of newspaper. 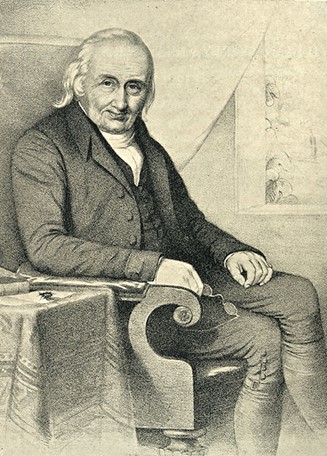 Kirby brought a deeply religious humility to his studies. Firmly convinced that his research was uncovering God’s intricate design, his belief in the fallibility of imperfect human reasoning made him cautious about sweeping generalizations. He was aware of how little was known.

Two quotes from his obituary in the Gentlemen’s Magazine sum up both his achievements and his character:

July 4. At Barham, Suffolk, in his 92nd year, the Rev. William Kirby, M.A. Rector of that place, Rural Dean of the of Claydon, and an Hon. Canon of Norwich; Honorary President of the Entomological Society of London, President of the Ipswich Museum, Fellow of the Royal, Linnean, Zoological, and Geological Societies, and an honorary member of several foreign societies.

The true secret of his passing through a long life, extending to nearly 92 years, with so much esteem and regard, and of his passing to another world with so much love and affection clinging to his memory, was that he endeavoured to live by the precepts of the Gospel, and to adorn the doctrine of God his Saviour in all things.