The brothers John and William Dade were strong Kirby supporters. The Dade family of Tannington Hall in Suffolk had been prominent for a long time.

John Dade (1726—1811) and William (1727—1755) were, according to the standard Dade genealogy, sons of Dr. John Dade (1651—1732). This renowned John Dade, of Tannington and Ipswich, had gone up to Gonville and Caius Cambridge in 1665/6, graduating in 1669 and gaining an M.A. in 1673. He was then a Fellow of Caius for twenty years, although he did at one point gain a licence to absent himself for three years’ foreign travel. He gained his M.D. in 1683 and practiced in Ipswich. Je was also a Justice of the Peace. In 1694 he married Jane Kemp, daughter of Sir Robert Kemp, Bart. of Ubbeston. Jane Kemp’s sister married Sir Charles Blois. Jane and John Dade had four children, two of whom died young (although according to the published registers, they died before they were baptized), and one of whom had children. Jane Dade died in 1724, and Dr. John remarried to Elizabeth Wingfield. The Wingfields were a large and prominent family, and John Dade’s grandmother was a Wingfield. Elizabeth was some 47 years John Dade’s junior, and by the time she had John and William, he would have been about 75. He died in 1732.

John Dade attended St. John’s Cambridge (with William Lynch), although, like Lynch, he does not seem to have graduated. His brother William was the academic success story. William went to Pembroke College, a year behind his brother, graduating with his B.A. in 1747/8, and obtaining M.A. in 1751. He was elected Fellow of the College in 1749, alongside such other Fellows as Christopher Smart, under the leadership of the illustrious Dr. Roger Long (another Kirby subscriber). Sadly, he died in 1755, although not before subscribing to both Kirby’s Twelve Prints and Historical Account, and the first edition of his Method of Perspective, in the subscriber list for the second being noted as “Fellow of Pembroke Hall, Cambridge”.

John Dade meanwhile took up the life of a country gentleman. Like his classmate, William Lynch, he joined the Suffolk Militia, although in Dade’s case as a Major, rather than a Captain. Also like Lynch, John Dade was painted by Gainsborough in the mid-1750s. The painting is now at Yale. 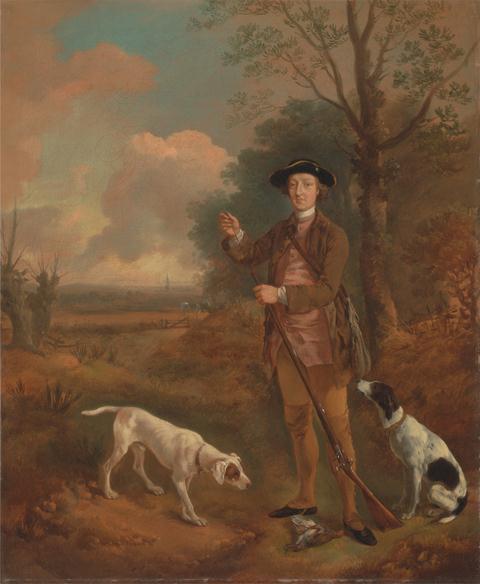 Both John and William Dade became Freemen of Ipswich in 1753, and John was chosen Bailiff, along with John Gravenor, in 1757. In that year he was also a Steward of the Beccles races, along with Sir John Rous.

John Dade married Sarah Pullyn of Halesworth in 1749. She was the daughter of Peter Pullyn, agent of the Persons of Quality desirous of protecting their game.

A consistent Kirby supporter, John Dade subscribed to the Historical Account, the Method of Perspective, and the 1764 edition of the Suffolk Traveller.

Lynch was from a substantial Ipswich family, descendant of a 17th-century clothier “of good fame”, and his father, Edward, was an Ipswich Bailiff. Lynch himself was to be Bailiff twice, in 1788, and 1792. After attending Ipswich school, he went to St. Johns, Cambridge, where he was in the same admission class as John Dade (also a Kirby subscriber). He did not graduate, and seems rather to have passed his time enjoying life. In the 1750s he was a Captain in the Suffolk Militia under Colonel Francis Vernon, nephew of the famous Admiral Vernon.

In his role as easy-going officer, he clashed with the famously argumentative Philip Thicknesse, then Lieutenant Governor of Landguard Fort, where the regiment of the Suffolk militia was stationed. Thicknesse appears to have harbored an especial dislike of Colonel Vernon (possibly because he was nephew of the famous Admiral Vernon), and was anyway a man ever on the lookout for jurisdictional disputes. As far as I understand the issue, when the soldiers were inside the fort, they were under Thicknesse’s purview, but when they were outside it, they fell under the command of their colonel. One day, Lynch, and possibly a few other officers, slipped off to Ipswich for a few days rest and recreation. Incensed, Thicknesse sent a demand that they instantly return, an order that was cheerfully ignored. Some time later, Lynch passed Thicknesse on the road without so much as a “salutation of the hat”. For what follows, bear in mind that our only source is Thicknesse, who wrote in the white heat of indignation three decades later (the story is related in Philip Gosse’s biography of Thicknesse from Thicknesse’s memoirs).

Thicknesse had Lynch thrown in jail for twenty-four hours to reflect on his lack of discipline and threatened to report him to the Secretary of War. Lynch, for his part, demanded a court martial, where, despite admitting to all charges, he was found not guilty. The affair (one of many in Thicknesse’s turbulent life, but one of few in Lynch’s) was only resolved by moving the regiment and replacing it with a different one. We next hear of Lynch as steward of the Ipswich races in 1758, surely a more congenial pursuit.

While still an officer, Lynch had his portrait painted by Gainsborough, one of a series of young officers Gainsborough painted around 1756. The portrait is now in the Muskegon Museum of Art in Michigan, and I do not have a copy to show. There is, however, a mezzotint from the portrait by Samuel William Reynolds, and the National Portrait Gallery has usefully put a copy on display.

His coat is lighter in the portrait, and you will notice that he does not appear in military dress. This is because, ten years after the original was painted, Lynch had Gainsborough rework the portrait, removing his hat, and covering up much of his coat.

Once in civilian life (the regiment was disbanded in 1762), Lynch married the nineteen year old Mary Fowler, daughter of “an eminent merchant”, in 1765, and together they had nine children. Lynch became one of the worthies of the town, appearing as director of charities and heading up subscription lists for various good causes. In 1794, at the age of 68, he signed up as Captain for an Ipswich Regiment of Volunteers formed to meet the threat of French invasion, and he died in 1797.